The third day with Riak had proposed to deploy Riak on a EC2 cluster as an exercise. I could not do it then due to poor network connectivity and lack of time (I was traveling), but I did it since and here I explain how.

EC2 is a service from Amazon to commission a number of virtual computers with specific performance characteristics, and with use charged by the hour (the rate depending of the performance).

The whole process is fairly simple and flexible. I got my computers up and running in minutes. Setting up Riak was a bit more involved (I should probably had tried on my local network first), but eventually I was able to load the data and run the queries I wanted.

In outline, here’s the process

And now the details.

There will be a few machines, and I need each Riak instance to speak to each other. This means I need to keep all the required ports open.

As each instance is on a different machine (presumably, I could have several instances on each machine but I want to keep things simple), I can use the same ports for each instance. I will just have to give them different names.

Basho has a helpful page on this topic. It lists the defaults ports (all of them TCP):

These are the ports I will open in my configuration settings.

I want a simple setup:

So I need to set 3 machines up, make the last two join the first, and open an SSL tunnel from my local machine to the ring leader.

Once this is done, I can use the console, select the EC2 tab, and click on “Launch Instance”.

I chose “Launch Classic Wizard” to have as much flexibility as possible:

Then I select a basic 64bit Amazon Linux: 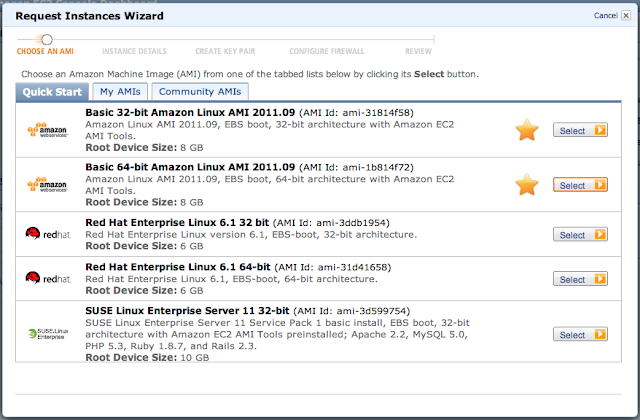 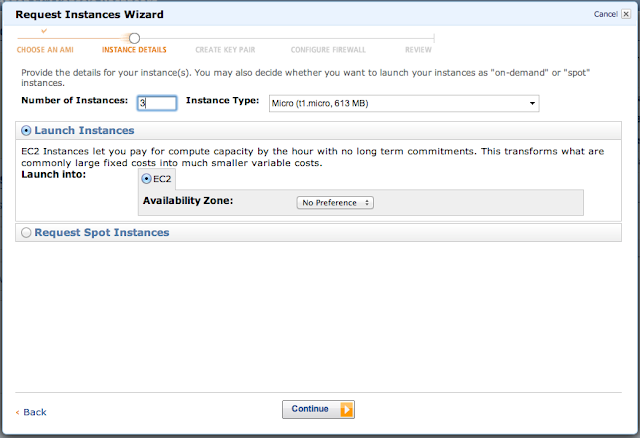 I just click through the next two screens (I do not have any specific need for such tuning): 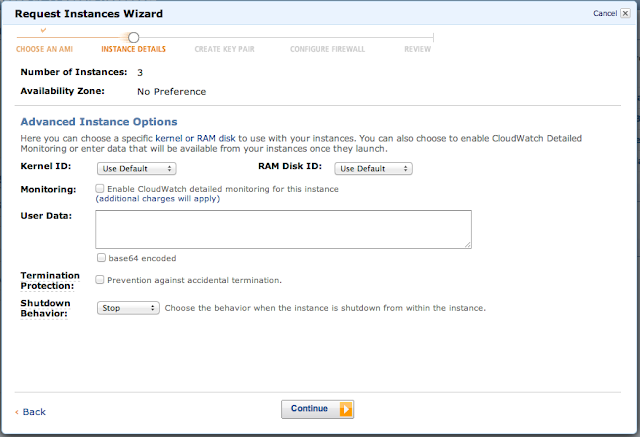 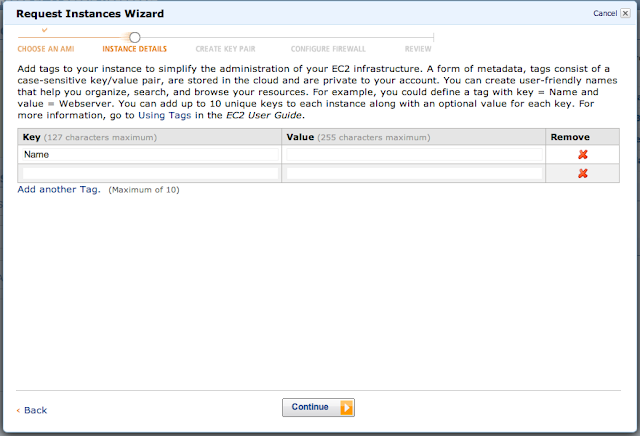 For the key pair, I just give a name, then download the file. I will use it later to connect to my new machines: 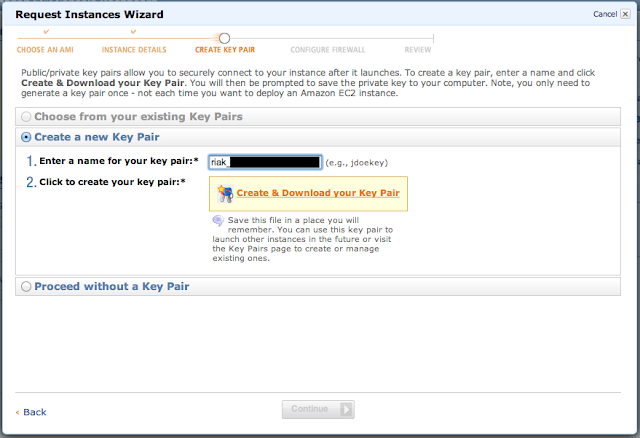 For the security, I first name my group, then I can use this name as the source parameter for the rules. All the rules are Custom TCP ones; I just need to give the ports (as determined above): 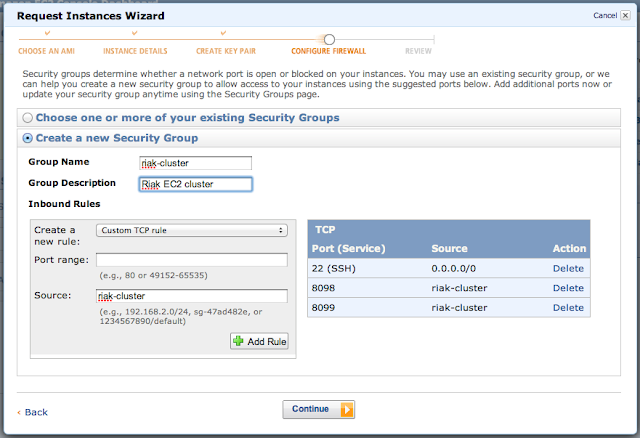 And then I can finally start my new machines.

On my first attempts, two of the machines did not start; I just created a couple of new machines of the same kind (64bit Amazon Linux Micro), and put them in the same security group.

Here are the complete security rules (I had to add some after the initial setup):

With this, I have a small cluster of machines. Time to connect and put them to good use.

From the EC2 Dashboard, I can access my instances, and get the address for each.

Using the private key downloaded earlier, I can open an SSH connection to each machine. Note that the user is by default called ec2-user:

Each machine has some basic tools, but no Erlang compiler. To avoid any complications, I chose and retrieved a binary distribution:

Then I installed the downloaded package (ec2-user can use sudo without having to provide a password):

There are a few error messages (or perhaps warnings), but the package is installed and running.

Riak is installed but not started yet. It is important to get the configuration right before starting it.

For each server, I give it a name that includes the local network IP address (not the loopback IP address 127.0.0.1). It is important, otherwise the machines cannot talk to each others.

I can get it by running ifconfig. I look for the ethernet setup and especially the inet value: this is the IP address in Amazon private network. I need to remember the IP address for what I will call the first machine, so I copy it somewhere (and call it here <IP_ADDRESS_1>)

Note: the editor will be vi.

I also need to change the app.config file:

I first need to insert a range restriction configuration. I insert the following block near the top:

So I replace the lines that read

Once this is done, I started the instances:

I can test each instance with:

Finally, I can link all instances together by executing on the second and third machine:

Testing again the status should show three instances in the same ring.

In case of error, uninstall riak, delete the /var/lib/riak directory, and start again (as I did).

Setting up the SSL tunnel

Nothing simpler. Using the first machine name (the one I configured for connection from the ethernet interface):

And now I can run from my local machine

and get the status of the Riak server as if it was local.

The book suggest to use the example data from Basho’s website, which is what I did. I downloaded the goog.csv data file and the load_data script. I changed the port number in the latter to use 8098 instead of 8091, then I just ran it: the data is send through the SSL tunnel and loaded in my EC2 cluster (but it is very slow).

Once this was done, I checked the various queries proposed on the page, and also implemented the MapReduce Challenge:

The MapReduce Challenge is to compute the days with the highest volume of dollar traded. This first step is to compute this value, as it is not part of the initial data.

I use a definition found here, which makes intuitive sense: Volume*(High - Low)/2

I need to keep both the date and the amount, so my map function will keep both items in a data structured indexed by month:

Then when reducing, I can compare the traded amount and keep the best:

To test the whole, I can use the following command, then copy and paste the query, and execute with Ctrl-D. The command below is run on my local machine, but thanks to the SSL tunnel, it will execute on the cluster:

For this one I use a similar approach: I create pairs with the date and the amount of dollar traded, but this pair is what I return directly (instead of returning it indexed by month).

Indexing by date would not work as in the reduce step I would have to keep the result in a simple (i.e. not indexed) variable, and therefore would forget the date. By keeping both data items (the date and the volume traded in dollar) in the same object, I can reduce a list of such objects to a single item and still retain all the relevant information.

The mapping function creates just a pair object from the data:

The reducing function retains the best date by volume traded in dollar for each batch. It is simpler than the previous one as the values are simple (i.e. not indexed):

And that’s it for today.